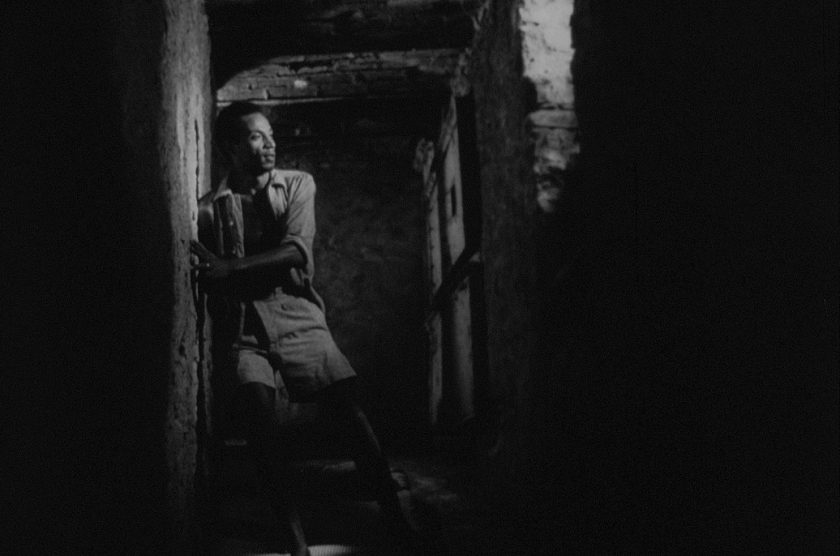 To watch, to talk, or simply share Sarah’s work is to share many young African nation’s first films. She was borderless – the production and themes of her work manifest that. Although Monangambeee is directed by her, a Guadeloupean, and produced outside of Angola before our independence in 1975, I still consider it to be our first Angolan film. After centuries of colonization of Angola by the Portuguese, Sarah’s Monangambeee brings to the big screen for the first time a story based on an Angolan short story, O Fato Completo de Lucas Matesso by Luandino Vieira, with two Angolan liberation fighters (Elisa Andrade and Carlos Pestana) acting as protagonists. The film was released ten years after the official start of our armed liberation struggle in 1961 and tells the story of a political prisoner who is tortured after receiving a visit from his wife who promises him a complet (Fato Completo, a full-piece suit) in her next visit to the prison.
Monangambeee is a short film with very little dialogue, but it speaks volumes about the power of language and music. The english translation of the film’s title is White Death, but this translation doesn’t do justice to the warning cry the word means – which is that those who are taken away will not come back. This powerful word that inspired filmmakers, poets, musicians, and many other artists always comes as a reminder of the brutal history of the slave trade, colonization, and political repression in Africa.
Also, by giving the definition of complet (Fato Completo) at the beginning of the film, Sarah masterfully invites the audience to join those who are oppressed and are fighting for liberation. Only the Portuguese characters don’t know what is going on or what the word means. Sarah exposes the ignorance, misogyny, and racism of those who torture and kill.
The fierce soundtrack of Monangambeee by the Art Ensemble of Chicago is an essential character of the film that helps build one of the most disruptive torture scenes in cinema where we don’t see a single drop of blood or the person who perpetrates the torture. Monangambeee sets the tone for what will become Sarah’s slow cinema, with powerful high contrast close-ups of stories of the anti-colonial struggle and the Black identity across the forty films she would come to direct.
Monangambeee marks the debut of filmmaker Sarah Maldoror’s long and astounding career dedicated to creating films that went beyond the rigid rules of militant cinema. She trusted poetry and an unceasing creative freedom as the beacon of her work. She believed that cinema and poetry form a path to build a more just world, and so do I.

The direct Portuguese occupation of Angola began in 1575 and ended in 1975, after a thirteen-year war of independence called Luta Armada de Libertação Nacional (Armed Struggle of National Liberation) in Angola. With Angola’s ports opening to foreign shipping in 1844, Luanda became one of the largest cities of the Portuguese Empire, exporting almost all the produce of the continued forced labor system and facilitating the continuation of slave smuggling to the United States and Brazil. It was the Berlin Conference held in 1884 that compelled Portugal to move towards a more “effective occupation” through immediate conquest of all the territories to which it laid claim. By the end of the nineteenth century, the Portuguese colonizers had established the borders around the territory that Angola encompasses today.

Sarah Maldoror (1929-2020) was a Black filmmaker, activist, and feminist of French-West Indies descent and is considered one of the pioneers of anti-colonial and African cinema. Her legacy includes 42 films made between 1969 and 2009. Actively involved in Angola’s anti-colonial liberation struggle, her most famous movies, Monangambeee and Sambizanga (1972) were produced and supported by liberation movements such as the Front de Libération Nationale (National Liberation Front, Algeria) and the Movimento Popular de Libertação de Angola (People’s Movement for the Liberation of Angola).

Fradique is considered one of the most celebrated and expressive voices in contemporary Angolan cinema. His first feature film Air Conditioner (2020), had its world premiere at the Rotterdam International Film Festival and participated in more than forty international film festivals, receiving ten awards. Independência (2015), his first full-length documentary, focuses on Angola’s liberation struggle. It won Angola’s Culture National Prize for Cinema in 2015.
As a filmmaker and one of the founders of the Angolan collective Geração 80, Fradique is an advocate of cinema from the Global South. He has been a part of various panel discussions at international film festivals and universities focusing on African cinema, colonial archives, film collectives, and urban filmmaking. He is also an alumnus of the Berlinale Talent Campus (2011) and the Realness Institute Screenwriting Residency (2017). Fradique currently lives in Berlin where he is writing and developing his new feature film.